Industry Intelligence Explore the key drivers in eCommerce and track them in real-time.

Retailer Benchmarking Diagnose the state of your store’s sales performance and see where to improve.
Solutions
Industries
Brands Retailers
Blog
Company
About Careers Contact
Log in Sign up free
article

We look back at 2022's Black Friday to see what has changed this year, and dive deep into e-commerce performance during Cyber Week in the US.
Lucas Jones
6 min read
01 December 2022 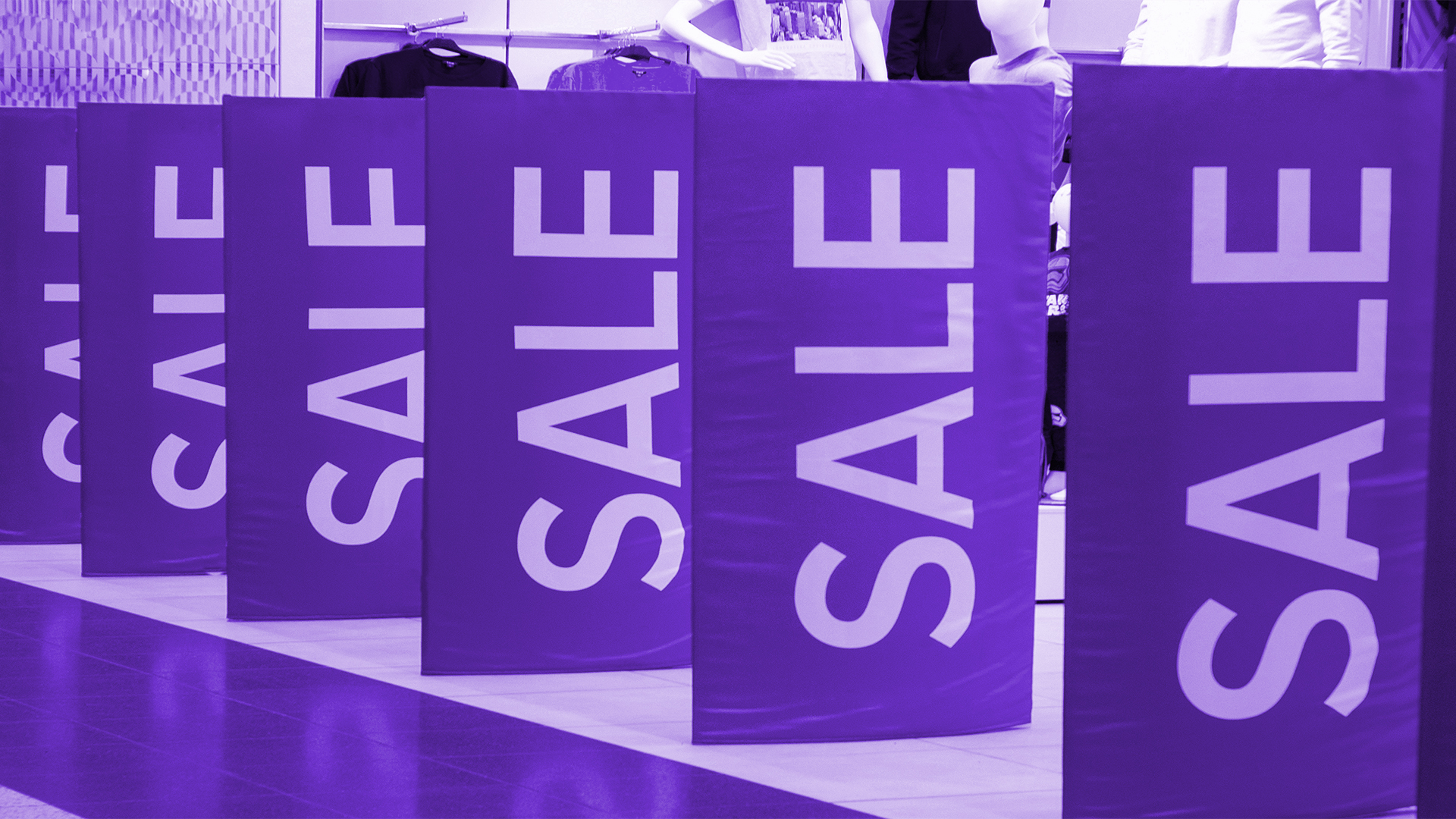 In a recent Grips report, we asked the question: Is Black Friday Dying?

Well the data is in and e-commerce Black Friday sales increased marginally in the US this year, compared with last year. According to Grips, US e-commerce transactions on Black Friday 2022 were up 1.2 percent compared to Black Friday 2021, a year notable for the first drop in YOY revenues on the shopping event day. 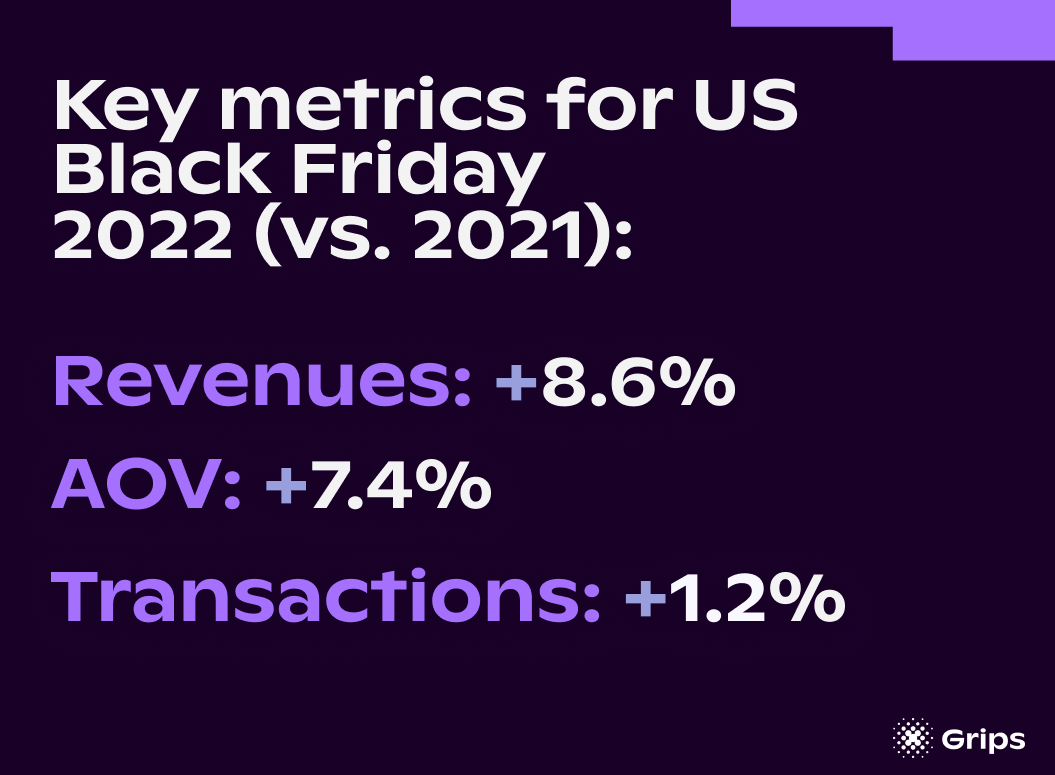 Whilst transactions increased modestly on Black Friday 2022, we can see the impact on consumers of retailers offering sales earlier and the rise of inflation and interest rates, leading to more selective spending.

But, it is not all doom and gloom. Despite Black Friday growth being marginal, the week including Black Friday (Sunday November 20 through Saturday November 26), benefitted to some extent from retailers’ early discounting. Grips found that transactions were up just 0.5 percent YoY, but revenues were up 10.2 percent. Interestingly, overall AOV for the week was $102.24 and AOV was the lowest on Black Friday itself.

The highest AOV of the week was observed on Thanksgiving Day when consumers spent an average of $106.15, a 17.8 percent increase over Thanksgiving Day 2021, an indication that consumers were seeing more items on sale and purchased them before the clocks struck midnight. The day after Black Friday, sometimes known as Small Business Saturday, saw AOV grow 16.4 percent YoY reaching $104.94.

How did key categories perform?

Digging into key consumer categories, we saw more of a mixed bag with categories like Home & Garden and Beauty posting strong gains YoY while other mainstays were either flat or slightly down.

Average order value growth was strongest for Beauty retailers with AOV up 17 percent reaching $78.16. Growth was more modest for Home & Garden (up 6 percent to $278.43) and Consumer Electronics retailers (up 6 percent to $137.47). AOV was down just 1 percent for transactions made on Toys & Games sites ($36.35). Video Game retailers, despite seeing positive growth in transactions and revenue saw AOV fall 7 percent YoY to $58.41 possibly due to a greater reliance on game sales than consoles this year.

Looking at individual days during the week of Black Friday, Grips showed that Consumer Electronics, Home & Garden and Toys & Games saw higher AOVs on Black Friday itself ($183.93, $293.95 and $42.45, respectively), an indication that shoppers  held off buying bigger ticket items in these categories to make sure they were getting the best deal. For Beauty and Video Games, AOV on Black Friday was on the lower end possibly because shoppers found acceptable deals earlier in the week and didn’t feel the need to hold off on clicking the buy button.

The daily data yielded some additional interesting findings. In the Consumer Electronics category, for instance, revenues were actually up YoY from Sunday through Thursday indicating that consumers were, in fact, taking advantage of offers that went live prior to Black Friday. They did not, however, spend enough during those lead-in days to make up for the larger drop in sales on Black Friday to post an overall gain for the week.

Stay tuned as Grips analysts will be monitoring holiday shopping behaviors and reporting back throughout the season.

For now, retailers in the US can breathe a (brief) sigh of relief as it appears the gamble to prolong their sales periods this holiday season has paid off.

To get even more insights into how consumer trends will impact the 2022 holiday shopping season, download our free report. 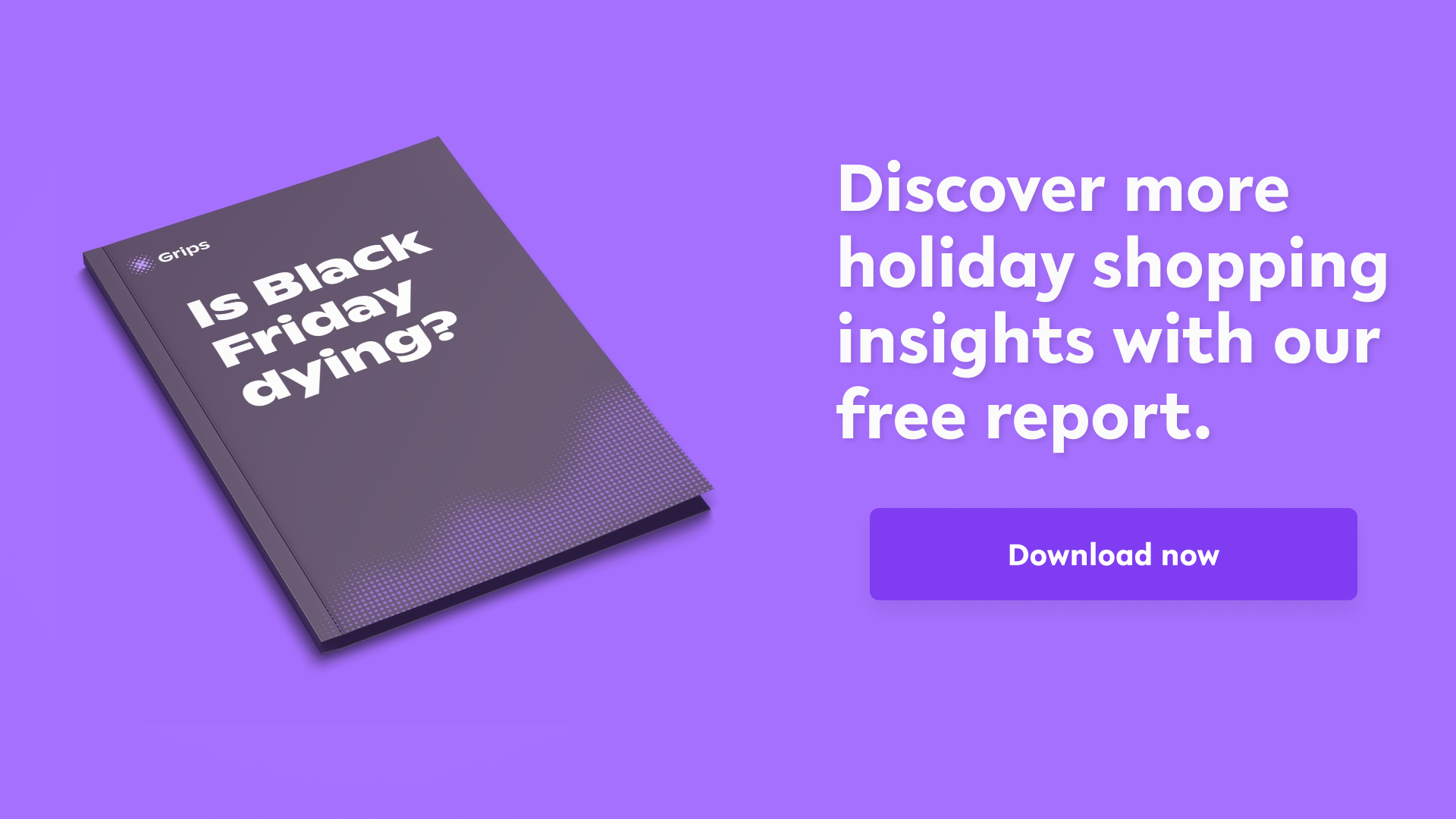